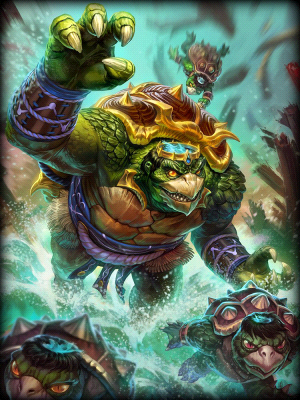 Each time Kuzenbo takes over 2% of his maximum health worth of damage, pre-mitigation, he is granted a Stack of 1% Damage Reduction for each 2% lost as the bowl of water atop his head fills (Max 10 Stacks). Stacks last 10s and are refreshed each time he gains another. When he is knocked up, knocked back, grabbed, pulled, banished or otherwise disrupted, the bowl loses half of it's stacks until he begins to fill it again.

Kuzenbo summons and throws the powerful NeNe Kappa, who can ricochet off of walls. After firing, if the NeNe Kappa bounces off of a wall it will travel 70 units from that point up to a maximum of 2 bounces. If an Enemy God is hit by the NeNe Kappa, it will burst forth from it's shell and attack them.

The spikes on Kuzenbo's back extend out, damaging enemies who attack Kuzenbo. While active, each time Kuzenbo takes damage, the cooldown on NeNe Kappa is reduced.

Kuzenbo charges forward, immune to slows and roots, damaging Enemy minions and using his immense strength to push the first Enemy God he hits along with him. Each subsequent Enemy he hits deals damage to both that god and the god Kuzenbo is pushing. Colliding with a wall will also deal damage to the pushed god. Pushed targets can be hit a maximum of 3 times.

Kuzenbo pulls himself inwards under his shell and spins, summoning fierce currents that knock enemies back, increase his movement speed, and allow him to move freely in all directions. Damage after the first spin is reduced by 50%.

Kappa are devious creatures. They linger just below the surface of rivers and lakes, waiting for mortals to test the water before snatching and drowning their fleshy meal. Taken merely at their appearance and juvenile sense of humor, they could be mistaken for mischievous turtle-men, almost playful in a rude sort of way, but they are dangerously strong and ruthless when submerging their prey. King among these monsters is Kuzenbo; bigger, stronger, and more cunning than the rest, but just as infantile.

Kuzenbo led his nine thousand Kappa followers to Japan, where they harried river villages and fishing boats, using their unnatural strength to pull mortals below. So clever, so hungry had the Kappa become, that Japan's army marched to fight back, but they were no match.

As the bowl-shaped indentation atop a Kappa's head is filled with water, that Kappa grows impossibly stronger - far stronger than a mortal. Yet, bound by their strange sense of honor, a Kappa must bow when bowed to, spilling their power upon the ground. It is the only known way to defeat one.

And of the countless battles Kuzenbo has fought, he was defeated only twice. Upon his second defeat at the hands of General Kiyomasa, Kuzenbo was forced to swear to never again sow strife between man and beast, a vow the Kappa King has honored ever since.

Gods, however, are fair game.