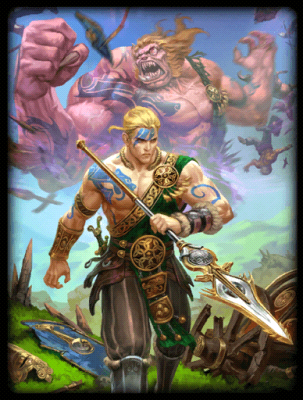 Cu Chulainn's Mana, Mp5, and Mana Heals are instead applied to his Health pool. Abilities consume Rage, which stops regen at 25, but he gains Rage upon Hitting with his Abilities as well as 1 Rage for Basic Attacks and when he or allies are Damaged. After 3s above 85, he goes Berserk. While Berserk, Cu Chulainn gains Power and a Health Shield.

Cu Chulainn thrusts his spear forward, damaging all enemies in front of him and stunning less powerful minions. Successfully hitting an enemy with this ability restores 6 Rage (to a max of 18). Barbs from his spear stick in opponents and reduce their Healing taken for 4s.

In his Berserk Form, Cu Chulainn instead slams his massive arms down, damaging and rooting all Enemies in front of him.

Cu Chulainn vents his anger as superheated steam, increasing his Movement Speed and draining his Rage. Every .5s while in this state, all enemies within range are damaged by the heat. Vent Anger does not return Rage.

Cu Chulainn vaults over his spear, leaping to a target location and slamming it down to damage enemies around and in front of him. Successfully hitting an enemy with this ability restores 6 Rage (to a max of 18).

In his Berserk Form, Cu Chulainn instead charges forward damaging and driving all enemies back with him.

Cu Chulainn swings his spear Gae Bulg in a circle around him, Damaging and Knocking Up all Enemies. Successfully hitting an enemy with this ability restores 12 Rage (to a max of 36).

In his Berserk Form, Cu Chulainn instead gives a terrifying yell, Damaging all Enemies and causing them to Tremble.

Thrice born child of Gods and Kings, Cú Chulainn is legend brought to life. A warrior without equal that, alone, held an army at bay; a man of will and courage that resisted both the allure and wrath of the Morrigan; a figure of tragic prophecy, destined for greatness and an early grave. So many legends are there of his achievements they could be spoken for days and yet still more be told. And yet throughout his triumphs, his death loomed constant, foretold and certain.

In his early years, while still bearing the name Sétanta, he was already an impressive individual, catching the attention of King Conchobar with feats of strength and agility. Conchobar invited the boy to a feast hosted by the smith, Culann. Left unchained by mistake, Culann's fearsome guard dog assailed Sétanta when he arrived. With only his bare hands, the boy defended himself and slew the beast. Ashamed, Sétanta swore to Culann he would personally train a new dog and would guard his home in the interim. Impressed, the druid Cathbad declared Sétanta would now be called the Cú Chulainn, the Hound of Culann.

This was the birth of a hero, but his death was yet bound in prophecy. Cathbad, the same druid that named him, promised a group of boys, "Any that take up arms this day will become legends." Seeking greatness, Cú Chulainn raced off to find weapons before hearing more. He saw years of victory, of achieving the impossible, of becoming a legend before him. Cathbad, however, was devastated, for he knew that those that took up arms that day were also foretold to die young.