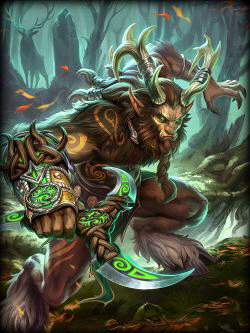 Cernunnos wields a Glaive as a weapon. His basic attacks deal additional damage to all enemies in melee range while he is throwing it. The additional damage from Heavy Throw does not proc any effects from items or abilities.

Cernunnos imbues his glaive with the power of the 4 seasons. Activating this ability rotates him through 4 different bonuses to his basic attacks.

Cernunnos fires a bramble forward in a line that roots a single enemy hit. Upon hitting an enemy, wall, or reaching max range it will explode dealing damage and spawning an area of brambles at the location. This area deals damage every .5s and slows enemies inside it, and persists for 5s.

Cernunnos charges forward, damaging and crashing through all types of enemies.

Cernunnos selects an area where The Wild Hunt will begin. After a 1s delay, enemies in the area will be damaged and Polymorphed into wild boars. Polymorphed targets are silenced and disarmed. Polymorph is not affected by diminishing returns.

Standing upon the edge of the wooded realm of Cernunnos, one can feel the invitation and the threat. "Come and feast," it calls. "Nature provides an abundance of crops and wild game." Yet, the same voice turns dark. "Treat everything with due respect," it warns. "This is not your home." And, should one peer intently enough through the shadowed branches, a figure can be seen, horned as a stag, clothed in moss and leaves, eyes burning like untended embers. Cernunnos is master here, and although he has much to offer, he will not tolerate greed.

Time turns on the Sacred Wheel, Spring to Summer, Summer to Autumn and Autumn at last to Winter. Cernunnos was there at the shaping of the wheel, born of the womb of the All Mother before Gods were Gods and the land was shapeless. This wheel is not of his making. He is both master of it and slave to it, transforming with the seasons like the world beneath his feet. He bears a heaving metal torc around his neck as a permanent pledge of loyalty to this cycle of life and death that only he can drive.

Once, it was said, there was no break between his realm and this world. They were the same. Perhaps a time will come when the world shall once again be his. Then, all can walk among the whispering leaves. So long as they remain humble. For the arrogant, Cernunnos hunts. What are these other Gods? Guest or prey?