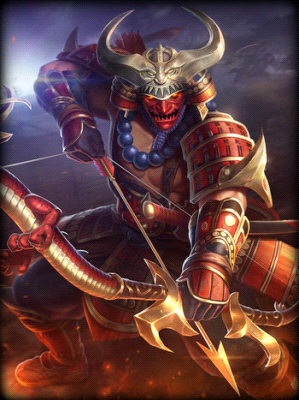 Hachiman grows stronger as he lands his blows. Hitting enemies with Basic Attacks energizes Hachiman, granting him a stack of MP5. Stacks up to 5 times, stacks last 8s.

When Hachiman toggles on this ability, instead of Basic Attacking he fires a series of arrows that do additional damage that falls off at long range. Each hit may trigger item effects for basic attacks, and can critical hit.

Hachiman calls down sacred banners from heaven, damaging all enemies in range, granting himself Attack Speed, and leaving a banner which buffs his and allied Attack Speed while within range.

Hachiman dashes forward, damaging and passing through enemies. Upon reaching his destination, Hachiman swings his blade in a full circle, hitting all enemies in range. If hit by both attacks, enemy Gods are stunned.

Hachiman leaps on his horse and charges forward. While mounted, he is immune to Crowd Control and can aim separately from the direction of his horse. He may fire to launch an arrow at every Enemy God within a cone.

War. It is an inevitable truth of Gods and Men. Harbinger of death and misery, of orphans and widows, of safety. It can be brutal and bloody, lacking all mercy, stripping away humanity, leaving only violent souls. Some believe war is about more than victory, some believe it is how that victory is won. That a warrior can be honorable, can treat his enemies with respect, that he can retain his humanity. When there is war to be fought, this is the kind of warrior Hachiman teaches.

Pregnant with her unborn son, Hachiman, the Empress Jingu led a fierce campaign against the forces that slew her husband. Fearing her child's birth would slow the army's advance, she tied bandages about her belly and held him within for 3 years, until the war was done. Each day, she prayed she would not lose the child, that he would be born strong. That he would be a God. As 8 banners descended from heaven, heralding his birth, her prayers were answered.

Hachiman embodies all a warrior should be. Temperate but fearless. Deadly not ruthless. Respectful, to enemies and allies alike. He understands that war cannot be stopped, so he teaches how war should be.

Even in this, a war between Gods, Hachiman will retain his code. It is the humanity of the Gods that appeals to mortals, that makes them love and worship him. Should Hachiman lose even that, then he is no warrior. He is only war.