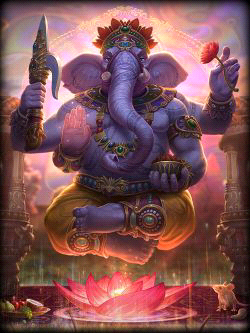 Any time Ganesha deals a killing blow, the nearest Friendly God receives credit for the kill and Ganesha receives the rewards for an assist instead. In addition, his assist range is increased by 20 and time before he loses assist credit is increased by 5s.

Ganesha curses his Enemies with his considerable willpower, damaging them. For each Enemy he hits (up to a maximum of 5), all Allied Gods within 55 units of Ganesha gain bonus Damage.

Ganesha charges forward, hooking an enemy with his goad, holding them in place and damaging the enemy before knocking them up. While dashing, Ganesha passes through player-made deployables.

Ganesha summons the Four Great Pillars of Righteousness to imprison his Enemies. Between each pair of pillars a magical field is created, and Enemies who pass through the field take Damage, are Slowed, and have their Protections reduced for 3s.

Ganesha begins chanting and rises into the lotus position, where he is slowed slightly but allows him to travel freely in all directions. While chanting, he silences Enemy gods in a cone in front of him and increases Physical Protections for all nearby Allied Gods.

After rigorous celebration, Parvati, Goddess of fertility and love, washed the dirt and sweat from her body. It floated upon the surface of her pool, formless and purposeless. With a wave of her hand, it was transformed into a boy, her son, and set him to guard the door as she finished washing. Shiva, the supreme being, returned and found this child doggedly blocking his path. Fearing the safety of his wife, Shiva drew his sword and cut him down.

"This is your son!" Parvati cried. "You must save him!"

Hurriedly, Shiva replaced the head of the child with the wisest creature in the world, that of an elephant. Thus, was Ganesha truly born.

Generous, warm-hearted, and optimistic, Ganesha has assumed authority over the very thing his mother tasked of him - obstacles. For those whose hearts are filled with boastful arrogance, Ganesha challenges progress. Financial difficulties, faulty materials, and unhappiness plague their every action. But, for the honest, the hard working, Ganesha clears the way. A life of good fortune, bright skies, and joyous laughter.

Obstacles can be either placed or removed. So, to Ganesha all mortals pray when starting a new endeavor, that their path will be open and their future bright. That he may grant them success.

Only with reluctance has Ganesha joined the Battle of the Gods. Violence is the last obstacle the elephant-God would ever place. But these are not mortals that threaten existence. They are Gods, and it is time that Ganesha determined who should succeed, and who should fail.