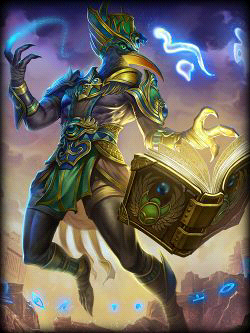 Thoth pens the names of his fallen opponents in his book, recording their weaknesses. After killing 30 enemies, Thoth gains a stack of 4 Magical Penetration. He unlocks a new stack every 4 levels, up to a maximum of 5 stacks at level 17.

Thoth raises into the air, ignoring the Basic Attack Movement penalty and conjuring 3 Hieroglyphs. His next 3 Basic Attacks pass through Enemies and apply Ability Damage instead.

If these attacks pass through the Glyph of Pain, their range is increased by 30.

Thoth dashes in the direction he is currently traveling. After dashing, for 5s Thoth's next basic attack instead fires a magical projectile at the target which slows and deals ability damage.

If these attacks pass through the Glyph of Pain, Both the Dash and the Projectile's range are increased by 30.

From his book, Thoth conjures forth a Hieroglyph in front of him. Thoth's ability projectile passing through the glyph receive increased damage, and a range increase of 30.

Thoth begins summoning pages from his book, up to a maximum of four. When all four have been summoned, he sends them forward damaging all Enemies in their path.

Thoth may activate this ability again to fire the ability early, doing a reduced amount of damage based on the number of pages currently summoned.

Legends tell of a tome of magic, wherein all the secrets of the world can be found, where the spells to change the fabric of reality are written, and where the knowledge to master death is inscribed. The legends understate reality. So powerful is this book that the mere flipping of pages sets Gods on edge.

This lexicon of legerdemain was no product of happenstance. Every incantation, every inflection was carefully crafted by a God beyond comprehension, of wisdom so transcendent, he willed himself into being. He is Thoth, the Scribe of Secrets.

Three great battles there have been, and at each, Thoth was present, aiding the forces of order to triumph over chaos. When Ra faced the world serpent Apep for the final time, Thoth's spells shielded Ra against the reptile. When Osiris was dismembered by his brother Set, Thoth taught Isis the incantations to reassemble him. And when Horus, the child of Isis and Osiris, battled Set once again for control of the Kingdom, Thoth's rituals cleansed the young man of Set's vilest poisons.

All of the secrets, the power, the wisdom of the universe, Thoth has placed into this book. He is the guardian of this knowledge, invoking it only to save the world, to keep it from descending into disorder.

But now, the world is falling into chaos. God battles God. The heavens quake, the earth shudders, the seas boil, and mortals cry out. If ever there was a time for Thoth to break the binding of his book, it is now. This world is unprepared for the secrets he will reveal.