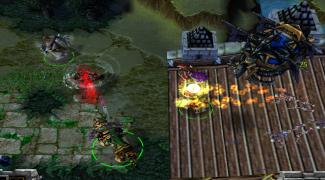 Few maps can claim a legacy quite like Tides of Blood. As well as being a respected and well-received map in its own right, ToB is also cited as an inspiration for many of the best AoS maps ever made.

It enjoys the rare and deserved privilege of being enshrined in Blizzard's official Hall of Fame, among only five other maps. 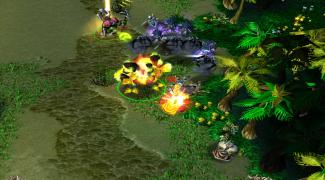 There's a very nice and relatively recent map called Crimson Coast (CycLotRuTan, 2009) which I never had the pleasure of playing in its prime. As lane-pushing games go, it doesn't have much of an emphasis on interesting map objectives, but is instead a fairly creative exploration into different types of heroes and skill mechanics, particularly when it comes to increasing the quantity of abilities available to any individual hero. 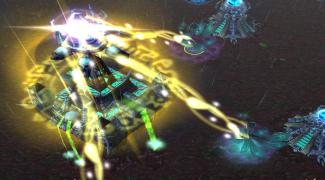 Halloween isn't the only thing to celebrate this week; it's also the 10-year anniversary of the spookiest AoS around: Extreme Candy War (Blizzard Entertainment, 2004)!

This map was released as a seasonal treat, and distributed as part of Battle.net's update patches. It marks Blizzard's first entry into the world of multiplayer lane-pushing games, and is remarkable for following very few of the usual AoS tropes of its era. 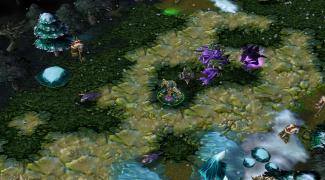 I stumbled across an old gem called Aerie of Ruin (FuriousBroccoli, 2004) just recently, and I'm delighted that I did. It's a highly asymmetric game, but in a way that creates great dynamics and makes you think deeply about how to play the matchup. 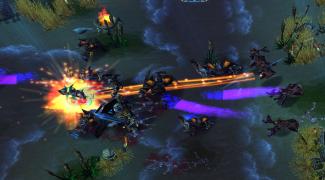 I'm not a fan of Veramarth, but it has a one-of-a-kind layout that I haven't seen anywhere else. Rather than the usual square-like map dimensions with main bases tucked away in each corner, Veramarth takes place along the banks of a river, with the main bases directly opposite each-other.

There is little wasted space: the battlefield is large enough that the map doesn't feel cramped and that there is room between the lanes, but has no long walks or windy side-paths. 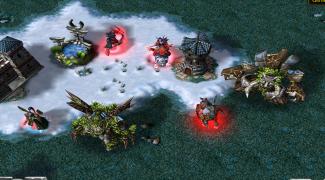 Rival Nations (MicrosoftXP, 2002-2004) is a well-established member of the 3v3v3 sub-genre of AoS maps. It has a couple of neat ideas that make it stand out from its peers, including the ability to control several heroes at once. 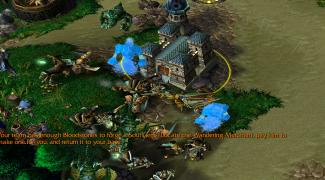 Ruiner's Domination is one of the most polished and professionally made AoS maps of its era. Its clean visuals combined with simple but well-embedded game rules has led it to age gracefully, even when played over a decade later. 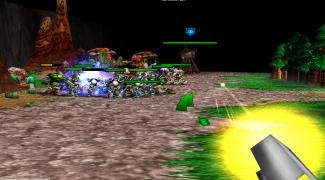 The day has finally come where I review Ninjas on Battle.net! Formerly known as Ninjas in Pyjamas, NoB achieves an interesting contrast of being possibly the most informal AoS map ever developed, while simultaneously pioneering clever mechanics that have since been picked up on by commercial titles.

Its playerbase will describe the map as "silly, but fun", which echoes the relative unimportance of balance, the absurd abilities, and the plentiful references to gaming-related pop-culture. 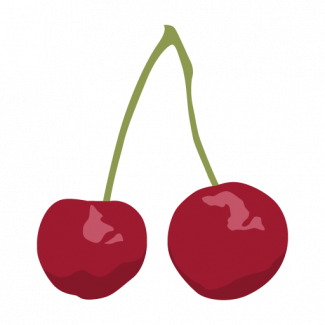 I'm sure most of you are familiar with the concept of drafting, the pre-match ritual in which players negotiate the characters that will be in-play during a match. Typical drafting phases consist of an alternating sequence of picks and bans. I've listed the drafting sequence for several commercial games below. There's some variation, but they're all pretty similar:

15th May, 2014By Softmints8 minutes
It's another interview; this time with moonliterhythm (aka SuaVe), the developer of perSonas/Arkana! I used to share a forum with him many years ago, so this was a surprise reunion.
Subscribe to

Softmints
I will also be heading to @Imirt_ie and @Games_NI's event "Run for the Border" tonight to catch up with lots of fin… https://t.co/wrX2RJQ4Dv
6 days 2 hours ago

Softmints
A dev blog update for RoW! We got tons done in the last month. I also wrote some details about our current toolset… https://t.co/Nnhhwh2ts5
6 days 2 hours ago

Softmints
Finally got around to publishing my interview with TekkVicious, developer behind Enmity Campaign (2005)! Check it o… https://t.co/NtVwvUYOOC
1 month 2 weeks ago

Softmints
Just finished an interview today with TekkVicious, the developer behind Enmity Campaign! Should be published on… https://t.co/O4Toj7Sv4N
3 months 3 weeks ago