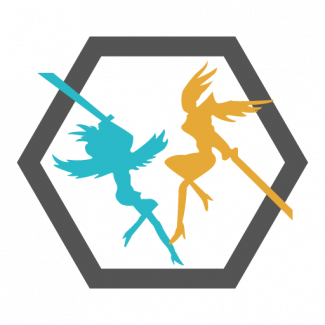 It's called Killer Queen, and it's played 5v5 on a 2D platformer-style battleground, with short 1-3 minute rounds.

The game loosely models two beehives at war. One player on each team plays as the powerful queen, while the rest play as workers. There are a number of 'gates' around the screen which workers can use to upgrade themselves to soldiers, gaining wings and an attack, but losing the ability to help complete objectives.

Teams must find a balance between military presence, gate control, and progressing towards one of the three victory conditions:

Having three ways to win is the core of the gameplay, and the result is very dynamic: with a variety of rush strategies, slower positioning games, and sudden upsets. All three victory conditions are viable individually, and can also be used as distractions or threats while working towards a different victory. Knowing when to pivot, and when to go all-in is part of the strategy and fun.

The challenge of having three unrelated victory conditions is trying to assemble some sort of narrative that players will understand, otherwise they won't know why they lost. This proves tricky, and Killer Queen employs a few different ideas.

Firstly, at the start of each round the game flashes the three victory conditions to all players: 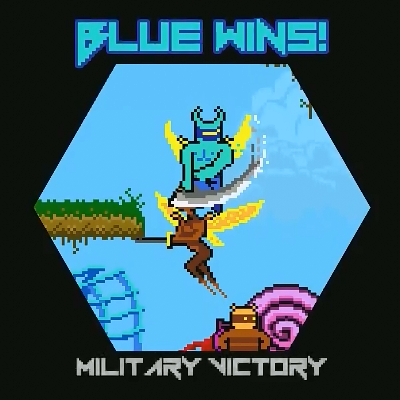 This is a good starting point, to make sure players know that there are multiple victory conditions

Secondly, once a team wins, the game will zoom in on the finishing blow (in whichever form it took), and say exactly who won and how. This is effective because rounds are short, and players can learn quickly from the directed feedback.

Finally, the game borrows familiar symbolism from other games. The goalposts for the snail victory are depicted by a soccer net, while the queen's remaining lives are represented by a row of eggs from which she hatches to revive.

Neither of the above is consistent with the "bees and beehives" setting, but they make the mechanics easier for players to grasp. Uniting 3+ victory conditions into a singular cohesive narrative would be a struggle for any game, and it's easy to see why Killer Queen chooses to rely on external reinforcement and familiar cues when getting its message across.

An arena game taking inspiration from Killer Queen might find success with a similar approach. I would be less confident trying to have multiple victory conditions work in a lane-pushing game. With longer match durations, a clear narrative is important to keep players focused, and each additional victory condition starts to fragment that.

We don't want players to feel that their progression throughout the match was worthless, because now the team is moving towards a different goal. Trying to find a balance where pivoting is viable but not necessary would also be a challenge.

Having multiple paths to the same victory condition is the "tried and true" approach in the genre at the moment, and I don't expect to see that change any time soon. If you'd like to observe the game in action, check out some of the links below.

Agree with you that moba games have to be more careful about having major pivots, but I think having multiple victory conditions can be a useful (though potentially lazy) way of providing fun gameplay with both some level of pivot-friendliness, and low potential for upset.

I think the key to this is choosing objectives that optimise the level of indirection necessary to provide that pivot. More concretely, in long games like MOBAs, your objectives need to be consistent, but not so consistent that only one objective is likely to occur. Taking league of legends for example:

* Bad, too much indirection: secure a position above the top lane and hold it under your team's control for 5 minutes (not consistent with the storyline of pushing lanes)
* Bad, too much consistency: kill baron nashor 5 times for victory (killing baron 2-3 times is sure to give you an opportunity to kill the nexus, so the victory condition is rarely achieved)
* Good, consistent but unrelated: be the first team to achieve 20 kills
* Better, consistent but less volatile: achieve a 50% gold lead over the enemy team after 10 minutes

I'm curious of others agree with me.