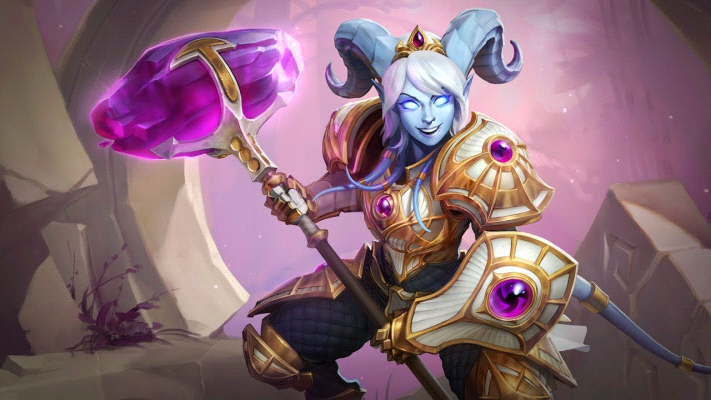 Activate to instantly charge Yrel's next Basic Ability at no mana cost.
Passive: Yrel's Basic Abilities charge up over 1.5 seconds, increasing in effectiveness, but reducing Yrel's Movement Speed by 25%.

Unleash holy energy around Yrel, dealing 42 damage to nearby enemies and healing her for 96.
Charging up this Ability increases its damage up to 140, and healing up to 320.

Swing Yrel's hammer, dealing 38 damage to enemies in front of her and knocking them away.
Charging up this Ability increases its knockback distance, and damage up to 125. Enemies hit at maximum charge are Stunned for 0.75 seconds.

Leap to a location, dealing 225 damage to enemies in an area and Slowing them by 50% for 1 second.
Charging up this Ability increases its range.

Surround Yrel in a barrier for 3 seconds, absorbing all damage taken and healing her for 50% of the damage received.

Yrel sanctifies the ground around her, gaining 40 Armor until she leaves the area.

Born on the alternate Draenor, the sanctuary of the exiled draenei, Yrel was dedicated to her faith. She grew up in the Temple of Karabor, the center of the Holy Light for her people, and served as an acolyte. Devoted to her beliefs and her studies, she showed promise as a healer. Prophet Velen noticed her talent. He invited her to train as his pupil and began to teach her the value of leadership and sacrifice. But Yrel carried a dark secret within her. Velen sensed it, and he foresaw that for good or ill, she had a larger role to play. Yet when she considered her prospects, Yrel preferred to stay inside the temple, quietly caring for those around her. Unfortunately, that ideal did not survive.

Her peaceful life was shattered when the savage orc clans forged themselves into a fighting force named the Iron Horde and set out to conquer Draenor. Yrel was captured and flung into a war. Enslaved by the Iron Horde, she eventually gained combat experience while fighting the orcish threat. After the demise of Velen and numerous betrayals from within draenei society, Yrel took upon herself the burden of leading her people. She became a member of the Council of Exarchs, and an important figure among both the draenei and the Alliance forces on Draenor.