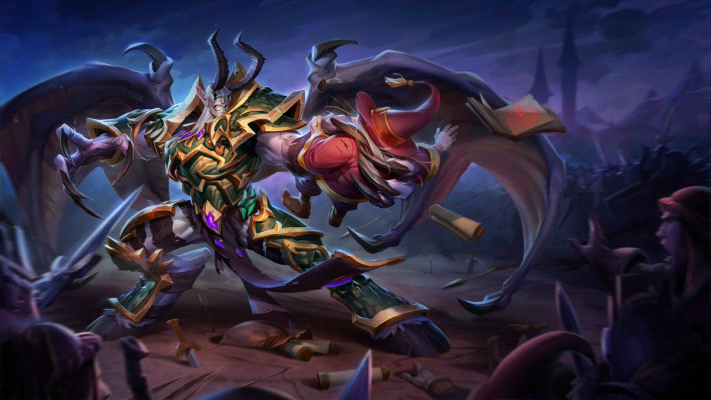 Violently slash in the chosen direction, dealing 72 damage to enemies.
Reactivate to slash up to 2 more times. The third slash Stuns enemies for 0.75 seconds.

Desecrate the air, dealing 110 damage to nearby enemies and gaining 25 Armor for 3 seconds.

After 0.75 seconds, gain 50% Movement Speed for 2 seconds. While active, Mal'Ganis can move through enemy Heroes and put them to Sleep for 2.5 seconds.

After 1 second, disperse into an Invulnerable swarm of bats for 3 seconds, dealing 132 damage per second to enemies. Vampiric Touch heals for 100% of Carrion Swarm's damage to Heroes.

Channel on an enemy Hero for 0.75 seconds, then swap Health percentages with the target over 3 seconds.

Mal'Ganis is one of the nathrezim, or dreadlords, who served as the Lich King's elite jailers. He aided the Lich King in his task of preparing Azeroth for the Burning Legion's second invasion, spreading a plague through Lordaeron that would turn the population into mindless undead. Posing as the leader of the Scourge, he confronted Prince Arthas at Stratholme, and watched him purge the city before its citizens could turn. Impressed by Arthas' resolve, Mal'Ganis goaded the prince into following him to Northrend. In a desperate attempt to defeat Mal'Ganis, Arthas sought and found the runeblade Frostmourne. However, this was Mal'Ganis' plan all along, as Arthas forfeited his soul to the Lich King when he claimed the weapon. When Arthas finally confronted Mal'Ganis with Frostmourne in hand, Ner'zhul betrayed his jailer and commanded Arthas to slay the dreadlord.

Mal'Ganis, being a demon, wasn't killed and his soul merely returned to the Twisting Nether. After reforming his body, he returned to Northrend, where he manipulated the Scarlet Onslaught - an elite branch of the Scarlet Crusade - in the form of Barean Westwind. When his cover was blown, Mal'Ganis retreated, but eventually came back when the Legion invaded Azeroth for the third time.