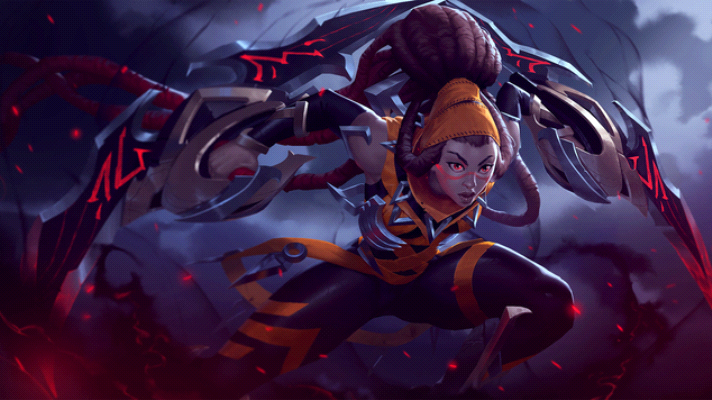 Three quick stabs that deal 6 damage each, followed by a heavy strike that deals 16 damage.

EX: Throw a small knife that deals 8 damage and inflicts Weaken. Hitting an enemy causes the knife to bounce to a nearby ally, healing them for 16 health. If there are no nearby allies, it returns to you.

Hold to charge a dash for up to 0.8s to increase damage and range. It deals 8-18 damage and dashing into a wall triggers a wall jump that inflicts Incapacitate.

Counter the next melee or projectile attack. When you counter an attack, gain Immaterial for 0.5s, turn invisible, and increase your movement speed by 35% for 2.5s. Your next Assassin's Cutwhile invisible becomes Shadow Slice, dealing 14 damage and inflicting Phantom Cut.

Launch a hook that deals 6 damage and pulls you and your enemy together. You strike after colliding, dealing 8 damage. Hook Shot can be used to pull yourself to a wall.

Strike forward with both weapons. Deals 22 damage, inflicts Stun and heals yourself for 22 health on hit.

Stun: Target is unable to move or use abilities for 0.25s.

Summon a phantom that dashes forward, dealing 18 damage and stopping behind the first enemy hit. Upon arrival, it chases and strikes enemies in bursts for 18 damage up to 3 times.

A young assassin from the Shadowblade clan, Jamila suddenly found herself the new leader after the death of her mother, the previous matriarch. As the youngest leader in the clan’s history, some call her too inexperienced and undeserving of the title. Determined to silence those detractors, Jamila enters the arena to prove her mastery of the Shadow Arts.