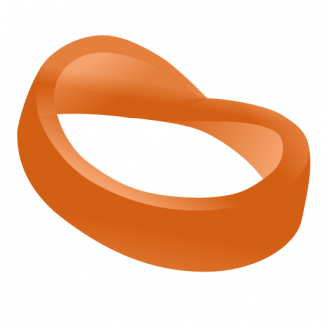 I occasionally enjoy connecting game design with other disciplines, and musing on how the two relate. Sometimes the results give me fresh insights, or better yet: new vocabulary for describing parts of a problem that I hadn't considered!

In this article, we'll be exploring lane-pushing level design as viewed through the lens of topology.

Topology is a branch of mathematics. It explores similarities between shapes: focusing on how their surfaces connect rather than the number of sides or angles between points. (The latter would be a concern for geometry.)

To a topologist, shapes can be viewed like balls of dough. It's okay to stretch them or squeeze them or mould them however you like, and it's still the same shape. The rule is that as long as the dough's surface is never torn apart or pasted to a new surface: the shape has not fundamentally changed.

Thus, a sphere, cube, pyramid, and d20 die are all equivalent (or to use fancy term: homeomorphic). The number of sides doesn't matter; but there are a few things which do: including dimension and the number of holes in the shape.

Holes are quite important because if we don't tear or paste surfaces, holes stick around forever. And if part of a shape passes through a hole, you get a knot (but lets not get tangled up with those).

I'd like to relate these ideas of topology to lane-pushing maps. I will choose to define a hole as an area which is completely untraversable and inhospitable to gameplay: as though it were the edge of the map.

We often see cliffs and pits which are less traversable, but invariably some hero or another can pass through them or fly over them. Those don't count.

Under this definition, most lane-pushing maps share a single topology: a 2D shape with no holes. Sometimes it's a square, sometimes a rectangle or an oval – but as we discussed: that doesn't topologically matter. If you run in any direction for long enough, you'll reach an edge. This is true of League of Legends, Dota2, SMITE, etc.

What does it look like to have one hole in the map? The simplest to imagine would be a ring: perhaps two lanes running along the outer circumference with a jungle occupying the interior.

Depending on the size of the hole, this could really isolate the lanes from each-other, producing a different type of gameplay than we're used to. Heroes on foot would need to take a very indirect path to gank, and there are few angles from which to intercept a fleeing enemy.

Some of the maps from Demigod are very obvious in their use of holes: as the game has no jungles whatsoever to occupy space between its lanes. Defense of the Ancients was quite similar; moving between lanes was very difficult.

Do we keep digging?

Are holes a good idea? I think there's arguments for and against.

One thought to consider is that there are gaps in the walkability of the map, in the form of walls. In a sense, players already have to deal with untraversable areas, so what's to gain by rolling out more? Allowing a small number of heroes to pass through walls introduces a sort of topological diversity on a match-to-match basis, which seems kind of exciting.

A counterpoint is that with the mobility-creep we've seen over the years, there are a lot of tools to traverse walls and few options to constrain that movement. For example, there is nowhere on the Dota2 map that the hero Spirit Breaker cannot charge to in a straight line.

Is it a bad thing that we cannot cleverly position ourselves to block the charge by hiding behind a hole? Or is letting players roam the entire map a good thing for ensuring players feel powerful, and experience consistent ability UX?

Are there opportunities to be found with holes, in the same way that many recent heroes across all games have made use of cliffs and walls in their hero kits?

Perhaps holes could be an opportunity for creatures to spring forth from the abyss. Heroes might rely on them as entry-points for teleportation, or must channel there to recover mana.

Under what circumstances should a hole move? Could they close or open up from time to time, blocking access to key resources for all heroes? Should heroes be able to create temporary holes? I think there is plenty of room to be creative here.

We've mentioned that 2D topological shapes have proven popular. Certainly in technological terms they are easiest to implement.

In my view, the biggest advantage of the 2D topology is being able to project a tidy minimap. The minimap is simply a super tool for elevating strategic awareness: for the individual, for the team, and for the observer. Until VR becomes more established, I don't believe any lane-pushing game should pass up the opportunity to have a great minimap.

The first 3D lane-pushing game was Paragon. Topologically though, its maps were 2D. There was elevation here and there, but we did not see for example bridges with underpasses, which would count as a hole in the surface and stop the minimap from being a clean 1:1 projection.

The first topologically 3D lane-pushing map was Ascendant One, of whose ambition I'm a big fan. They legitimately put that game on the surface of a sphere, and you could run laps of it! If you run in any direction for long enough, you won't reach an edge.

Mind you, they took some steps to mediate things. Half of the sphere was in "night-time", and hazardous to traverse (but there were options). That meant the playable surface was a hemisphere, which mostly projects to a clean minimap. I think that was a good call for allowing players some autonomy in checking where enemies were at all times.

Funnily enough, to mimic a topologically 3D effect, it is enough to have a 2D shape where running off one edge will have you pop out on the other side. This is not seamless, and represents a cuboid rather than a sphere, but should be enough to prototype gameplay.

Are any other dimensions within reach? For the time being, 1D mobas are not a thought experiment to which I have attributed much time. 4D is probably still out, though I am excited for Miegakure to get a taster of how extra-dimensional games will play. (I'm hoping it will become easier to intuit higher-dimensional maths through games some day; it's an exciting space!)

Why limit ourselves to a single shape? Water War: Submerged is played on two: with players at almost complete liberty to switch between them. It produces some very exciting gameplay ideas.

More recently, the Heroes of the Storm map Haunted Mines has also experimented with this concept on a smaller scale by allowing heroes to transition between two planes at specified entry points.

One of the most famous shapes when discussing topology is the mobius strip: a piece of paper twisted and glued so it has only one side.

As well as dimension and the number of holes, topologists also consider whether a shape is orientable. That is, if I am at a point on the surface: can I walk to the same point but now be on the other side? That's true for a mobius strip, so it is said to be "non-orientable".

Now consider the shadow realm: a mechanic in both Paragon (Revenant's ultimate) and League of Legends (with the rework of Mordekaiser) where heroes vanish to a ghostly realm. They're in a familiar place, yet in the "underworld": literally on the other side of the same surface!

Paragon had several interactions with the shadow realm, as it incorporated some mechanics relating to invisibility such as shadow pools instead of brush. What if this was expanded further?

If we wanted to try a lane-pushing game on a mobius strip, one way to do it would be having a rectangular playing field with one looping edge, which also swaps the realm of units passing through. I suspect this experiment would work best on a narrow map where realm-swapping can be easy and frequent.

I'm reminded of Water War, though perhaps this would be a little crazier if the tools for passing between realms were expanded.

Making new lane-pushing levels is tricky. In some respects there's lots of precedent to work from, but players present such a high bar of scrutiny that innovating can seem intimidating. It certainly is for me!

Over the last few years, Dota2 and League have noticed the availability of walls and rivers and gradually incorporated those into hero kits. I propose this sets a precedent for doing the same with topological concepts like holes and orientability, and that level designers shouldn't be afraid to introduce these concepts to their games more liberally because hero kits can and will evolve around them too.

There are several concepts I didn't cover here, including elevation and teleportation. These will probably comprise a separate article, which will use vector fields as a lens to explore travel time. Look forward to it!