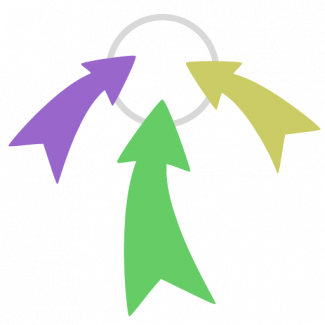 Just about every commercial MOBA shares the same victory condition of "destroy the enemy base". Is there anything that could be done to introduce some variety?

Before we begin, the word MOBA is used more inclusively by some people than others, so for clarification we need to divide the answer into two cases: lane-pushing games, and arenas.

The "obvious" way to describe a lane-pushing game is to describe the lanes: they are paths connecting each team's main base, troops spawn periodically and march along them, there are towers placed along the way, and so on. But, these details are implementation-specific.

What we're really looking for is whether the game has abstract "lanes", which satisfy the following three properties:

To understand why these properties are important, we first need to establish what principles will serve as the foundations of the game we want to make, and build up from those.

The first principle (or requirement) I'm going to propose is that we want a game where players are able to make informed strategic decisions. Not every game wants to emphasise that property, but here, we do. To make informed decisions, players need information. Not necessarily complete information, but they need "enough" that they can infer what the enemy's plans might be.

We need this information to be reliable and updated frequently, or it fails to be stable enough that players can make meaningful inferences from it. Hence, I call it a heartbeat. The particular information that's important is the position of enemy heroes on the map.

To know an enemy's position, we (usually) need vision of them. But since information is so valuable, heroes really don't want to give away their position. We need them to do it anyway, otherwise there's no heartbeat for the enemy team to work off.

Hence, we need an incentive for heroes to show themselves. If an enemy hero is ignoring the incentive, then we can still infer something from that behaviour. The incentive needs to be always-desirable, because we need the heartbeat to be steady. If sometimes there's no incentive show up, then we'd learn nothing from their absence.

It turns out that having a source of income on-lane is perfect as an always-desirable incentive: everyone could always use more resources! I am going to assume that all valid incentives are sources of income (for some resource) for simplicity.

Despite seeming like a valid contender, pushing doesn't count as an always-desirable incentive. In most games, a single hero can't make significant progress against an enemy tower, and it's safer and more efficient to wait until later when towers can be tackled as a team. Thus, the hero isn't going to try pushing now, so the incentive doesn't work.

To recap, our abstract "lanes" must be:

Now, the above doesn't require that the "lanes" meet. A minimal implementation of a game which has a heartbeat might look like this:

The red circles are visible to the red team, and give income to the blue team (and vice versa). That's enough to supply a heartbeat of information, but still sounds like a pretty terrible game: since players are actively encouraged to be nowhere near each other.

To make the game fun, we need to bring in a second requirement: we want constant PvP tension. Introducing this is easy: give players on both teams an incentive to be in the same place, and they'll start fighting! If the incentive/reward is constant, then the PvP should be relatively constant too.

If the PvP reward is ultimately awarded to only one team, we'll start to see a problem. Players will sometimes conclude that they won't be able to contest the location enough to get the incentive, and withdraw, resulting in less PvP. Hence, we need to at least partially reward participation.

So far, there should be some persistent places on the map which supply the heartbeat of information by being visible and a source of income, and some (other) areas on the map which motivate PvP by offering a reward to both teams for being there. Lets draw those PvP areas in purple:

We can go one step further: the natural union of these two game design requirements is to have places which are equally visible for both teams, and income sources for both teams. Such a location will then qualify to have PvP tension as well, and we can draw it below:

Our abstract "lanes" are now:

There are far more qualified people than I to discuss the importance and function of narrative in games, but I'll run through the basics.

Essentially, the narrative is "framing" the player's experience of the game, and just like a story, it encapsulates the beginning, the middle, and the end, and makes them fit together and flow smoothly. The player should intuitively know where they are along the journey, and what they need to accomplish next.

Pragmatically, the narrative provides players with a sense of structure and direction, and a well-implemented narrative will also improve the readability of the game state. Having a narrative is our third game-design requirement.

The particular narrative we implement is necessarily going to depend on the game's victory condition. We can't construct a cohesive narrative which suddenly has a different ending.

One meaningful victory condition for a PvP game is achieving 100% map control. If the enemy controls the entire map: you lose! None of our game-design requirements so far have specified that our abstract "lane" locations need to stay in one place.

We could actually have them move around if we like, and in particular, we could slide them around to represent progress towards the victory condition (how much map control each team has). It makes lot of sense that something about the "lanes" represents progress, since being "on-lane" is what players are doing for a large part of the game.

At this point, what happens next is obvious, and we might as well bring in the RTS terminology.

The "lanes" are now fulfilling all three of our game-design requirements, and the union of these three principles in a single mechanic is what for me, defines a "lane", and forms the foundation of the genre of "lane-pushing games".

Gosh, that was a long section! I'm glad the arenas one is short: they're just anything that doesn't have lanes (as defined above).

That is not to say that arenas can't try to meet the same requirements, of informed strategic decision-making, constant PvP tension, and narrative structure, but that they don't rely on a single mechanic which unifies the three.

I believe there is plenty of room for exciting arenas which are pretty close to lane-pushing games in spirit, just with slightly different mechanics. But in general, most arenas don't even come close. They don't have the broader resource management necessary to be strategic games (I would consider them to be games of tactics instead), and use short narratives like "capture this flag" or "fight to the death" to create variations in their PvP tension.

It almost seems like time for an afterword at this point, but actually all of the above was necessary for us to even discuss victory conditions! I am going to focus on lane-pushing games here, since arenas are pretty trivial.

Nintendo's recent game Splatoon has a mode where majority map control at the end of a countdown is the victory condition. A new game could experiment with almost anything. Once we've settled on a new victory condition, we need to adjust the "lanes" so that they fit into the new narrative.

There are plenty of ways the lanes could change to represent progress; perhaps they move in a different pattern, or teleport around. They might not move at all, and instead certain lanes start having bigger or smaller incentives depending on what's happening.

What's important is that they remain consistent with the narrative, and players can visibly see their progress towards victory or defeat as part of what they spend most of their time doing. With this done, we have a new "lane-pushing game" which satisfies our game-design requirements, and probably plenty of fresh new mechanics and corollaries to consider.

I would like to believe that there'll be plenty of twists and innovations of this type popping up in the next few years, and I'll be excited to see them when they do!

This article was prompted by a discussion among the FantasyStrike.com community, which was aimed at exploring alternative victory conditions in MOBAs .

Age of Empires 2 had an alternative win condition where you had to build an expensive structure (a wonder) if I recall correctly.

I think there's a solid argument that adding this kind of alternative condition is *reactive* design that spawns from a problem ("defending is too easy, the only way to win is to be a turtle"), or equally, bad design ("I can't figure out how to fix people from turtling, so I'll make an alternate win condition"). Another problem with that is the fact that many workers can construct a wonder simultaneously at the cost of resource. This forces the issue that the opposition must either stop you from constructing, or spend more resource to construct their own one faster. Without information (knowledge of the enemy's progress), you can't make meaningful decisions on when to strike or when to build. I consider this poor design.

More interesting, in my opinion, than alternate win conditions, are permanent side-objectives that influence the game's narrative - like the income generators in Tides of Blood. I'd like to see more like this.

Good article - I like how you refer to the lane state as a heartbeat. I've always liked the idea of fiddling with the heartbeat to cause change to game state, kind of like day-night cycle. I think I've seen at least one game before where the lane spawns slow down at certain times to cause opportunities for ganking.