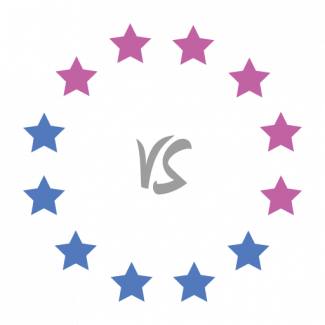 I was recently asked about 6v6 in mobas. What an interesting topic! There aren't any commercial lane-pushing games which use 6v6 as a serious/primary game mode, probably because there's no reason to mess with what's tried-and-true in your big-budget production.

In this article I want to explore how 6v6 could be done right. Lets dive right in!

With more heroes in the game, new kinds of lane configuration become possible, and even plausible. We could see split-pushing happen in pairs, or extreme situations like six heroes grouping up to push: possibly against zero defenders.

That poses a challenge, which I'll state generally as:

Objectives need to feel satisfying when contested by a wider range of hero configurations.

Towers and other objectives should present fair opportunities to both attackers and defenders. We don't want them so strong that solo heroes can't pose a threat, nor should they be so weak that a group of six heroes can snap them up for free.

This is a really important factor. I think it makes or breaks 6v6.

One approach seen in Dota2 is that towers gain armour for each nearby enemy hero. Bringing an extra hero into the fray will add some flat dps, but lower the overall dps of the group by a percentage. It's a nice mechanic which stops buildings from crumbling too quickly against large groups.

Another approach is to let solo players be effective through attrition. That is, introduce some mechanic where the amount of time spent pressuring a tower has a payoff.

Tower ammo as formerly seen in Heroes of the Storm is one candidate, with the amount of ammo tuned so that a sudden group push won't deplete the ammo, but a sustained push by one player will.

In Tides of Blood, pushes have a large number of units and take a while for towers to repel, which allows solo heroes time to chip away at buildings.

Furthermore, teams can buy workers and assign them to repair towers, but the workers have very little health. Even a single enemy hero's presence is enough to be a threat, and no-one likes losing workers. They're expensive!

Workers usually get pulled back until it's safe for repairs to continue, so solo heroes indirectly keep towers damaged by inhibiting their repair.

Another approach I favour is heavily asymmetric lanes. Imagine a map with one BIG lane, one long lane, one short lane, and one minor lane that is half-jungle.

These lanes command different priority: you might need 3 heroes on the BIG lane for most of the game, and pushing it down would be a 5-6 hero effort. Meanwhile, there are other lanes which require less resources to contest, but there's always pressure on the BIG lane so you have to think before committing heroes elsewhere.

A great example of this can be seen in Eve of the Apocalypse. One of its maps (Kedge's Landing) has a large beach lane, and a smaller cliff lane. The cliff lane has less units, but it has control points with giant towers that will bombard the beach lane to the benefit of their controlling team.

This kind of asymmetry is exiting to work with, and creates a tension where teams want to pick six heroes that are a balanced teamfight lineup, but are also pressured to have heroes that can work in a variety of smaller group settings.

It is worth mentioning that experience mechanics will play a large role in how teams choose to arrange themselves, so making sure those are serving good gameplay will be important.

A trend I've observed in many 6v6 lane-pushing games is that their hero design tends to be more role-based than their 5v5 counterparts. That's odd, right? Adding more players seems like it would simply add more action and fun... but it turns out the effect on gameplay is a bit subtler.

There's two reasons I've identified for this move towards roles.

The first is that if you increase the size of a team, the ability of that team to coordinate becomes a more significant factor in its performance. One way to think of it is "adding more people also adds more opportunities for communication breakdown to cause a loss".

Being part of a team which loses due to communication breakdown is not a pleasant experience. One way to stop that happening is to design with roles: if everyone has clear responsibilities that they understand, there is less room for communications to break down.

A second reason that roles become prominent is burst damage. Everyone knows that the more burst damage you have, the better it becomes! You deny the enemy team time to react, heal, or to get heroes in place that have defensive tools.

If hero stats were left intact, burst damage would be really strong in 6v6. With more heroes running around, there are more situations where 3+ heroes can drop one enemy instantly. Also, a numbers advantage means more: burst is better the more you have, so the sixth hero with burst to contribute is exponentially better than the fifth.

That's maybe enough to secure two kills immediately, which will be enough to have the enemy scattering like mice and playing on the (very) defensive for a while. Or generally speaking, it is more likely that a won teamfight happens with less casualties. Expect snowballing!

Whichever direction you choose to justify it, it seems roles are a pretty natural result in 6v6, and we'd expect that this effect would be even stronger in 7v7 and beyond.

Are there dangers with becoming a more role/team oriented game?

I think for casually-minded players, role-oriented gameplay is appreciated. It's less taxing to learn one role compared to the whole system, and the narrower the better. And with less individual responsibility, who can pass up having more reasons to blame the rest of the team for a loss? (Though there's no reason to believe that people don't have enough disassociation with the 5 players we're used to...)

Competitively-minded players might not be so happy. If a team's overall firepower is to remain the same, each hero is essentially having their numbers nerfed by 16.7%. That means somewhat less capacity for players to solo-queue their way to the top, and it's harder to be a stand-out player once you get there. (But in a more team-oriented environment, maybe it's easier to be a stand-out duo, or trio.)

I'll point out that in Star Wars: Battlefront, which has 20v20 modes, players occasionally find powerups that let them turn into narrative heroes like Darth Vader or Luke Skywalker for a while. We've seen HotS and Master X Master allowing players to pilot "narrative creatures", so maybe that's a solution for letting players in larger team sizes get a moment in the spotlight.

My feeling is that moving to 6v6 could be broadly beneficial for matchmaking if you have the player-base to support the queue times. But I might be totally wrong on that; maybe someone who knows these algorithms could chip in with some real-world data?

We should also note that esports and other LAN events become more expensive to support, since an extra player means extra flights, more hardware required, and a smaller split of the prize-pool for winning teams.

There are a handful of games which have already done 6v6. If you're interested: Advent of the Zenith, Desert of Exile, Tides of Blood vO, and Samurai Legends might be worth checking out.

One perk of 6v6 is being able to do "three pairs" as an actual game format. Suppose all twelve players are operating dual-pilot heroes (such as Cho'gall from HotS), or have some mechanic that makes them work in pairs. That could be a great exercise in cooperation both on a micro scale (with your partner), and a macro scale (with the team)!

To summarise, if you're making 6v6, you should expect to be working with hero roles (so try to keep those interesting), and definitely look into an asymmetric terrain.

Let me know if you have any further thoughts on 6v6 in the comments below.